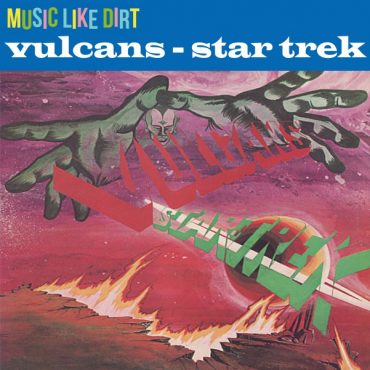 In 1972, Ken Elliott, formerly of prog-rockers Second Hand, recorded some crazy cool ARP 2600 synthesizer over some well-loved rhythms from producers like Bunny Lee to cash in on the 70’s easy listening market. Trojan’s production team of Joe Sinclair, Webster Shrowder and Desmond Bryan saw the success of early synthesizer albums such as Walter Carlos’ Switched On Bach and wanted to give the label a piece of the action. The result – with a crafty nod to a classic sci-fi TV series as its theme – was the Vulcan’s Star Trek album.

While the mix of the ARP 2600 and the reggae instrumentals is far from seamless, it’s often this very incongruity that creates such wonderful moments, transforming the music from an electronic/reggae pastiche (which is still really great) to something stranger and more exciting.

On the album’s title track, Star Trek (which is featured on Madlib’s Trojan catalogue looting Blunted In The Bomb Shelter mixtape / album) the synthesizer so dominates its funky reggae backing that you could swear you were listening to the soundtrack to an 80’s Charles Bronson movie instead of something released by Trojan in ’72. Journey Into Space has a horn driven instrumental as its foundation, but is smothered under cavernous, Doctor Who sound effect synths, creating a stoner’s wet dream combo of heavy reggae bass and tingly analogue synthesizers. Dr. Spock sounds like a reggae cover of an R&B standard with the ARP-2600 standing in for the horn section, while Shang-Haied uses the keyboard to imitate both the sound of whistling and of ancient Chinese instruments – all good stuff!

The Vulcan’s Star track album was an inspired release and remains one of the highlights of the Trojan catalogue.